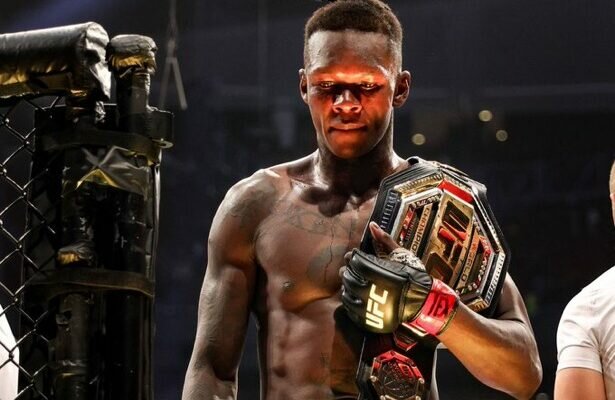 Israel Adesanya has been warned Khabib Nurmagomedov would stop him inside three rounds if the pair fought for the middleweight title.

The Nigerian star holds the UFC middleweight title and possesses a significant size advantage over Nurmagomedov, who retired from the promotion in 2020. Nurmagomedov never lost during his MMA career but only ever fought at 155lbs, hanging up his gloves as an undefeated champion after 29 bouts.

Nurmagomedov and Adesanya have spoken respectfully about each other in the past and a fight between them has always seemed highly unlikely. However, the Russian’s manager, Ali Abdelaziz, believes his charge’s superior wrestling would see him dominate Adesanya, despite branding him the best striker in the world.

“If Khabib comes tomorrow and cut to 185, he will stop Israel Adesanya in three rounds, this is my opinion,” Abdelaziz said when asked about a potential bout.

“I see it [at the gym]. He beat heavyweights, light heavyweights, welterweights, lightweights. He’s unstoppable. He’s like a tractor trailer. Styles, if Khabib want to come back and talk with [UFC president] Dana White, say, ‘Let me fight at middleweight,’ he will finish Israel Adesanya in three rounds because the style of fights.

“Adesanya cannot stop his wrestling, he cannot stop his grappling. Striking, of course, Israel is the best striker on this planet. But Khabib can come back and fight middleweight and become a champion today.”

Nurmagomedov has frequently stated his desire to stay retired from the UFC despite tempting offers of fights with Conor McGregor and Tony Ferguson. Nonetheless, he has stayed in training and was pictured taking on heavier fighters in the gym during sparring sessions.

Adesanya has yet to be defeated during his middleweight career but was outpointed by Jan Blachowiczwhen stepping up to light-heavyweight in a bid to become double champion. ‘Style Bender’ previously suggested he has grown in admiration for the Russian’s wrestling style which saw him retire with a record of 29-0.