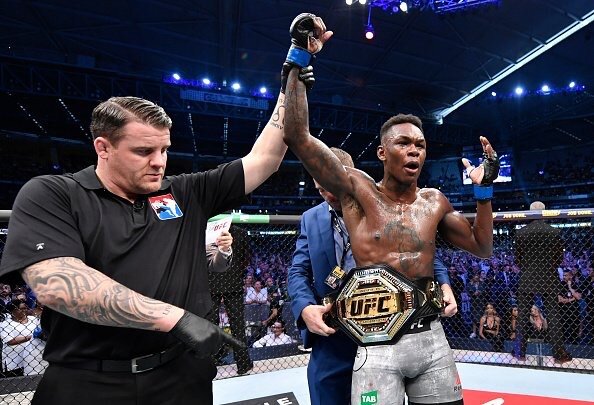 Welcome to The Israel Adesanya Era.
Just 18 months after making his UFC debut, the New Zealand kickboxer by way of Nigeria completed his breathtaking ascent to stardom, as he clobbered Robert Whittaker to claim the undisputed UFC middleweight championship on Sunday morning.

In front of a big crowd at Marvel Stadium in Melbourne, Australia, Adesanya (18-0 MMA, 7-0 UFC), who entered the bout as interim champion, knocked out Whittaker (20-5 MMA, 11-3 UFC) at the 3:33 mark of the second round to unify the title.
“He threw everything we expected. We had everything planned from Plan A to Z,” Adesanya said. “It’s unreal. They said I have no knockout power.”

Whittaker, who hadn’t fought since June 2018, came out loading up his shots, catching Adesanya several times over the course of the first round with jabs, hooks and overhands. As the round progressed, though, you could see Adesanya figure out his range and begin to strike back. Adesanya saved his best for last as he dropped Whittaker to the mat with a count-right that landed flush on the jaw a split second before the horn sounded to end Round 1.

In the second, Adesanya took control. Whittaker still threw bombs, but Adesanya effortlessly slipped them, and then responded with crisp counter combinations.

It was one of those combos that spelled the end. Whittaker landed flush on the face with a straight shot, but Adesanya, in the blink of an eye, landed a counter right, and then the big blow, a left on the jaw that knocked out Whittaker and ended the bout.

“He caught me with a nice one, but I returned,” Adesanya said. “I eat it, but give it back two times. That’s a two-piece right there. I can take it and give it back. He’s right; I hate to get hit. It’s stupid to get hit. I’m tough and smart. At the end of the day, my team and I were smart.”

The victory was Adesanya’s fifth finish in his seven UFC fights. Whittaker had a nine-fight winning streak, which dated back to 2014, snapped with the loss.

“My hat is off to Adesanya,” the no-nonsense Whitaker said. “He’s very strong, I thought I was doing well and then I got caught. … I didn’t get the ‘W’ today, but I’m not going anywhere.”

After the bout, Adesanya called out top contender Paulo Costa, who was seated cageside and exchanged gestures with the newly crowned champ.

“You know who’s next,” Adesanya said. “I have a heavy Ricky Martin wannabe next. Borrachinha. This is my octagon. I’m going to smash him. I want to rearrange his face.”