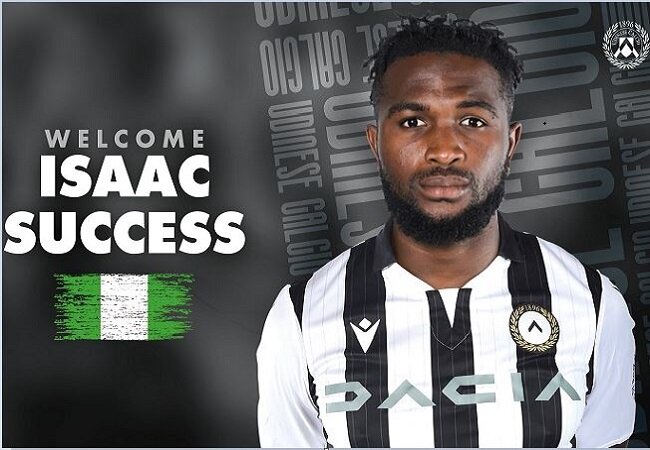 The return of former Super Eagle’ invitee, Isaac Success to Udinese of Italy has sensationally accounted for the exit of Nigerian-born attacker, Stefano Chuka Okaka from the Italian Serie A club that recently had William Troost-Ekong in their squad.

Megasportsarena.com reports that Success is at the Udine-based side as part of their long standing relations with Watford of England, where Okaka also played until two seasons ago, but both strikers have been considered ‘incompatible’ for the team’s attacking options.

Consequently, so soon after the arrival of Success from Vicarage Road, Udinese have announced the sale of 32-year-old Okaka to Istanbul Basaksehir of Turkey, where he was able to make a late summer transfer because the Turkish Super Lig’s deadline fell on Wednesday night.

The coast has now been cleared for Success to finally stamp his authority as Udinese’s main striker, years after he shot to limelight I Nigeria’s winning squad at UAE 2013 FIFA U-17 World Cup, but several bouts with injuries have riddle his career.

It is also a return to familiar terrain for the 25 year-old Success, who was unable to make any appearance this season for The Hornets.

With his career blighted by series of injuries, the product of BJ Foundation of Benin City returns to Italy, here he started his sojourn in Europe with the youth team of Udinese, where he fifth signing of the summer transfer window, on a full transfer that will run June 30, 2024.

The deal is believed to have cost the Serie A €1.80m between both clubs owned by the Giampaolo Pozzo family, and he was immediately granted the club’s number 14 jersey, following the departure of Kevin Bonifazi.

With the versatile, power-playing, all-action attacker, who was born in Benin City on January 7, 1996, known from his explosiveness and barging runs at goal, he was bound to be rated ahead of Okaka, whohappens to be a former Italian international.

Two spells in Spain, first with Granada and then Las Palmas, have not aided his course, with the biggest highlight being his return to The Land of The Armada for surgery last summer, but the horizon now looks clear with the departure of Okaka to Turkey.

Success’ new club confirmed in a statement: “After 75 appearances and 18 goals, Stefano Okaka leaves Udinese. The Umbrian striker has been sold outright to Istanbul Basaksehir.

“With his leadership and his technical and human qualities, Stefano has contributed to the achievement of targets for the club.

“From everyone at Udinese, we send the best wishes and a big thank you for what he has done wearing and sweating in the Bianconeri shirt.”