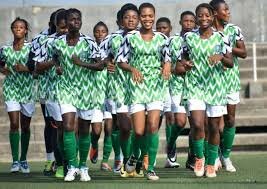 Nigeria’s opponents at this year’s FIFA U17 Women’s World Cup finals will emerge on Friday afternoon during the draw ceremony scheduled for the FIFA headquarters in Zurich, Switzerland.

Already, an Asiatic lioness nicknamed Ibha has been revealed as the Official Mascot of the 16-nation championship, which will hold from Friday 11th – Sunday 30th October in three Indian cities of Bhubaneswar, Goa and Navi Mumbai.

Nigeria, Morocco and Tanzania will fly Africa’s flag, to contend for the trophy against hosts India, China, Japan, New Zealand, USA, Canada, Mexico, Brazil, Chile, Colombia, Germany, Spain and France in the seventh edition of the biennial tournament that was launched in New Zealand 14 years ago.

India hosted the FIFA U17 World Cup for the boys in 2018 and were slated to host the girls’ event two years ago, but the covid-19 pandemic aborted that, necessitating a postponement and scaling down of the original host cities to three.

The Flamingos, who have featured in every tournament since 2008 bar the 2018 edition staged by Uruguay, prevailed over the Democratic Republic of Congo, Egypt and Ethiopia on the African continent to land in India.

On Friday, Nigeria will be in Pot 3, alongside France, USA and China (meaning they will not be in the same group with any of those three). Hosts India occupy top spot in Pot 1 alongside Japan, Spain and Germany, with Mexico, Canada, Brazil and New Zealand in Pot 2. Pot 4 comprises Tanzania (playing at their first World Cup), Chile, Colombia and Morocco.

WAFU B U17: Ugbade Pumps Up Eaglets’ Spirit Ahead Final Against Etalons