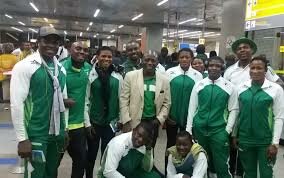 The president of Nigeria Wrestling Federation (NWF), Honourable Daniel Igali is picking positives from the country’s outing at the recent World Senior Wrestling Championship in Kazakhstan, as he says it gave a sign of good things to come at next year’s Olympic Games in Tokyo, Japan, megasportsarena.com reports.

Although none of Nigeria’s male and female grapplers were able to pick a single gold medal from their various outings in Kazakhstan, Igali insists they all gave very good accounts of themselves, and posited that they will be able to make up for what they missed in the East European country by winning lots of gold medals at Tokyo 2020.

The former Olympics wrestling gold medalist during his days as a competitor for Canada went on to single out Odunayo Adekuoroye and Blessing Oburududu for their Herculean efforts during their bouts in Kazakhstan, which he stressed further added to his optimism that they will rise to the occasion when the chips come down next year at the Olympiad.

While hailing the wrestlers that featured for Nigeria in Kazakhstan, Igali said he is now looking to the immediate and distant future, with a strong belief that the team will be able to build on the outing and go on to hit the expected targets next time, especially at the 2020 Olympics.

He added that missing out of medals in Kazakhstan will turn out to be a blessing in disguise, as he reckons that the grapplers will now be imbued with additional determination to right all wrongs, thereby going on to redeem their image by picking a haul of gold trappings come next year in The Land of The Rising Sun.

Igali philosophized: “It was not a bad outing for us in Kazakhstan. The wrestlers gave their best, but the medals we wanted did not come. In fact, the results were not true reflections of the efforts and quality our wrestlers put into all their matches.

“Odunayo was good, but she could only get bronze; same for Blessing, but I believe it was a good experience for them and they will build on it. The way I see it is that we are preparing to go and win the gold medals we want at the Olympic Games next year in Tokyo.

“I think the team as a whole did extremely well. In fact, the results don’t even properly tell the story of how these athletes wrestled here unfortunately, we didn’t win the title as we had hoped to in this tournament, but hopefully, we are postponing it for the Olympics.”