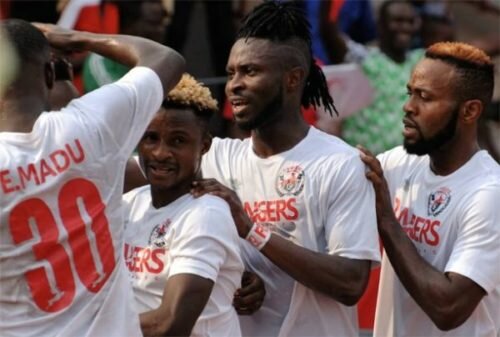 Rangers International of Enugu’s in-form striker, Ibrahim Olawoyin is relishing his goal that helped his side snatch a third straight win in the Nigeria Professional Football League (NPFL), as last weekend’s 3-1 win against visiting Abia Warriors of Umuahia took them up from bottom spot on the table, megasportsarena.com reports.

Although Ifeanyi George was the match hero, with his brace of goals sending tongues wagging at The Cathedral, Nnamdi Azikiwe Stadium on Sunday, Olawoyin said he was just happy to play his part with a goal and an assist, as he says team work is the biggest asset propelling the squad.

He added that technical aptitude from the coaches and support from their fans are also playing key roles in boosting the squad, as the youngster first shocked his former club when his alert reaction helped him knock home a rebound, then provided the assist for George to complete his brace in the 69th minute, as The Flying Antelopes went galloping to maximum points.

The match day 16 encounter saw the Coal Coty take the fight to the visitors as soon as referee Iyorha Ephraim sounded his whistle to signal the start of hostilities, with the trio of Chiamaka Madu, Ifeanyi George and Olawoyin leading the assault.

Coach Salisu Yusuf made two changes to the squad that won their previous match away to Warri Wolves of Delta State, and his players did not disappoint, much to the delight of their home crowd, which included two traditional rulers in the stands at the Ogui Road arena in EWnugu.

They did not have to wait long in the game to celebrate its first goal as a dashing dribbling run from Chiamaka Madu saw him glide through to fire a shot that the opposing goalkeeper, Charles Tambe parried, only for Olawoyin to tap into an empty net on seven minutes.

However, Emmanuel Deutsch’s were not left stunned for long, as they took the game to their hosts, with Oghenetega Ebetomame and Yakub Hammed causing Rangers’ defence troubles, as Bello Lukman grabbed the opportunity to draw the visitors level just three minutes later.

Before the interval, George headed in an inch perfect cross from Nwokeji to restore Rangers’ lead on 41 minutes, after which the visitors could have leveled up on 52 minutes but they were denied by Rangers’ keeper, Nana Bonsu while Chiamaka Madu and Kehinde Adedipe saw their 55th and 60th minute efforts miss target.

George then grabbed his brace on 70 minutes, as he ran onto Olawoyin’ defense splitting pass to fire an unstoppable shot past Tambe for Rangers third goal of the day before he was replaced five minutes later for Ivorian import, Pascal Seka.

On the stroke of ninety minutes, Lukman’ effort came off the hosts’ cross bar while a counter-attack presented Seka an opportunity to punish the visitors further but he chose to play to the gallery to the relief of the Warriors’ bench, while Olawoyin was left picking positives from it all.

Olawoyin stated: “I am happy that we won, and that I scored one of the goals. It was not easy, but we are happy we got the result that we need, and we are now off the bottom of the table.”