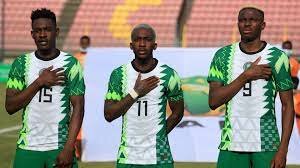 Olympiakos of Greece winger, Henry Onyekuru is in a wild battle of wits against FC Lorient of France striker, Terem Moffi to pair Victor Osimhen in the Super Eagles’ attack during Tuesday’s World Cup qualifier away to Cape Verde.

Megasportsarena.com reports that the absence of Leicester City attacker, Kelechi Iheanacho, who scored twice in the Eagles’ 2-0 victory over Liberia at Teslim Balogun Stadium, Lagos, has paved way for a new man to line out alongside Osimhen.

Team captain, Ahmed Musa is primed to play down the left wing and Moses Simon likely to keep his spot on the right, which leaves space open for the man to partner Osimhen, while Racing Genk of Belgium hitman, Paul Ebere Onuachu again starts from the bench.

These permutations have been gained from a press release by the communications department of Nigeria Football Federation (NFF) in a preview of the game billed to hold in Tuesday’s encounter, scheduled for the 5,000-capactiy Estádio Municipal Adérito Sena.

The absence of Iheanacho and five other players that started Friday’s victory over The Lone Star affords a number of unused lads to stake claims for permanent shirts in the Nigerian squad, with Moffi and Onyekuru in pole position for slots alongside Osimhen.

They will, however, have to watch out for Russia-based Chidera Ejuke and Italy-based former junior international, Kingsley Michael, while Cyprus-based Abdullahi Shehu and Innocent Bonke from Sweden are available for spots in midfield.

Of the lot, Musa looks on course to captain the squad and earn his 100th cap for Nigeria, two days on 11 years after he won his first national team appearance during a 2012 Africa Cup of Nations qualifier against Madagascar in Calabar.

The preview adds in part: “Three points will consolidate Nigeria’s leadership of Group C, confirmed after the victory over Liberia that followed the draw between Cape Verde and Central African Republic in Douala.

“A win will guarantee Nigeria a minimum three points ahead of any other team in the pool, even if Liberia’s Lone Star are victorious against Central African Republic in Monrovia.

“A win will also brighten the path of the three –time African champions to the knockout final round, given that home-and-away fixture against the Central African Republic is what is on the plate in October.