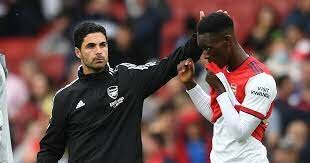 Arsenal of England youngster, Folarin Balogun has received a rather coy evaluation from The Gunners’ coach, Mikel Arteta, as the Spanish tactician chose to be cagey in his assessment of the lad’s impact so far this season in the English Premier League.

Megasportsarena.com reports that Arteta noted how Balogun has featured in some prominent games since the campaign began, but stressed that the Nigerian-born attacker will have to keep working hard in order to be relevant at Emirates Stadium.

The Spanish gaffer added that The Foxes are currently ninth on the Premier League table with six points after three matches.

Speaking ahead of this weekend’s clash with visiting Norwich City at Emirates Stadium in London, Arteta admitted that he did not give Balogun minutes in the last few games before the international break, but said it was simply because he wants the lad to keep improving.

The Gunners’ next game comes after Balogun made his debut for England’s under-21 team in their 2-0 victory over Kosovo during their European Youth Championship qualifier on Tuesday, September 7.

However, there is no certainty of action this weekend for Balogun, who got his EPL debut on the opening day of the season away to Frank Onyeka’s Brentford Town, before entering the game as a substitute against Chelsea but was not even dressed versus West Bromwich Albion and Manchester City.

EPL watchers are now wont to believe that Balogun’s fortunes at Arsenal are being affected by the presences of Pierre-Emerick Aubameyang and Alexandre Lacazette, who are now available for selection after COVID-19 related absences.

The ominous quality of both senior strikers means Balogun will remain down Arteta’s pecking order of strikers, and the gaffer has told the Nigerian-born youngster in unmistakable terms that he will have to fight really hard in order to keep a spot in The Gunners’ first team.

Arteta stated: “He made his debut against Brentford and he played the following game against Chelsea as well so it has been a big, big step for him in the last few months.

“He did all the pre-season with us so he has already learnt a lot in a few months. He is another player in the squad that has to fight for his place and ensure that he’s available to do that.”