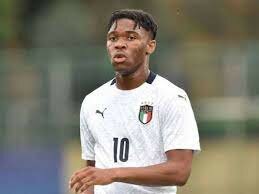 Udinese of Italy’s Nigerian-born defender, Destiny Udogie has admitted he will not commit his international future to the Super Eagles simply because he lacks passion for his father’s country, megasportsarena.com reports.

While stating categorically that he will not make himself available for Nigeria’s national team, the 19-year-old left-back reveals why he has decided to represent the Azzurri at the expense of the Super Eagles

Udogie said he has now qualms to openly declare that he feels more Italian than Nigerian and he will love to play for the country at the expense of the Super Eagles on the international stage.

The dark-skinned youngster, who is on loan from Hellas Verona, was born to Nigerian parents in Italy but admits he lacks information about his father’s country, hence his option to place for the nation of his birth at senior level.

The Cupid-faced lad made his debut with the Italian under-21 squad on September 3, 2021, playing as a starter in the qualifying match won 3-0 against Luxembourg.

Udogie told Carlo Garganese and Nima Tavalley on Italian Football Podcast: “I was born in Italy, so I feel more Italian.

“I grew up playing with the young players in Italy, so I want to continue with Italy.

“I hope to reach the first team and play as many matches as possible. It is my ambition to make it to the senior team.

“I just have to do my best in every game so I can show him [Roberto Mancini] my qualities and it is a big ambition I hope to be able to reach.

“I have been to Nigeria but I was very small…I think I was two years then, so I don’t remember much but I have been there.

“My favourite player, of course, is Jay-Jay Okocha because he is a big legend and everyone in Nigeria knows him, he is my biggest idol.”

Emmanuel Dennis Scores, Couldn’t Save Watford From Another Slump