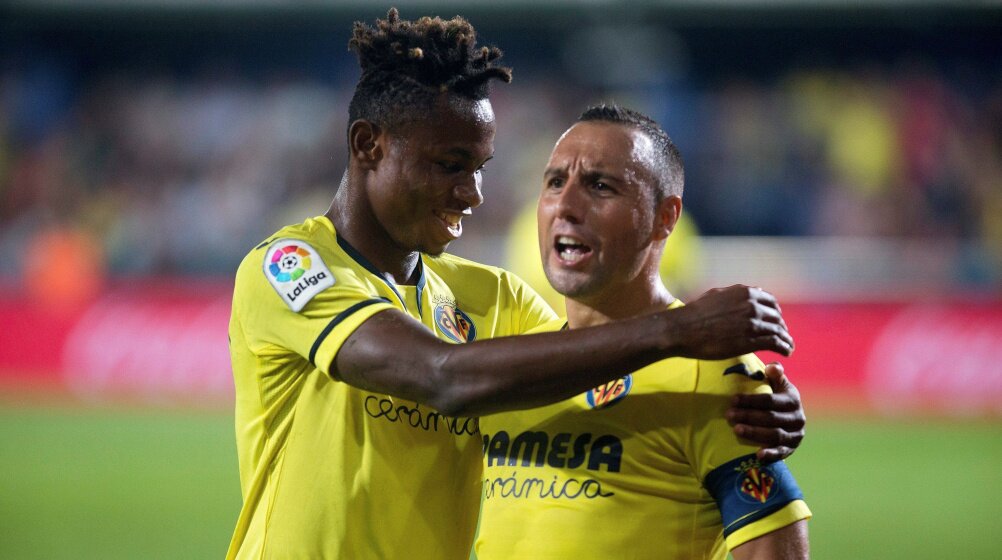 Villarreal of Spain winger, Samuel Chukwueze has received a stern warning from his veteran teammate, Santi Cazorla that the Super Eagles’ rookie should forget any talk about joining Arsenal of England for the time being, megasportsarena.com reports.

While many Nigerian football fans would be excited to learn that Arsenal have reopened interest in signing Chukwueze, who they first made a move for after he excited the globe at the 2015 FIFA U-17 World Cup in Chile, Cazorla says his teammate is too young to face transfer talk at this stage of the season, as that could cause distractions in his game.

Indeed, Cazorla’s words are coming at a point Chukwueze has faced a down-turn of sort with The Yellow Submarine, as his appearance ratio and goals turnover have dropped well below the standards he manifested in his first full season with the main squad last term.

Dramatically, while Cazorla was a former star at Arsenal and is known to excel under the tightest of playing conditions in his home country, Spain, the Spanish midfielder believes it is not yet the right time for Chukwueze to think about going to Emirates Stadium.

Although he admitted that The Gunners have contacted him to share his opinion and verdict on the possibility of Chukwueze moving to London and join the club that first offered him a five-year contract, following a successful medical after Chile 2015, Cazorla is suing for caution.

Pundits would recall that Chukwueze’s proposed move to Arsenal back in 2015 collapsed when The Gunners and his youth club, Diamond Football Academy of Umuahia, could not agree on the terms of payment terms, but the London club are angling for another try, now that the left-footed lad has broken into Villarreal’s first team.

Arsenal are believed to be keeping tabs on the Africa Cup of Nations 2019 bronze medalist, with a view to a transfer in the summer, but they are already facing stiff competition from additional interest coming his way on the radar of three other English Premier League clubs – Manchester City, Chelsea and Liverpool.

All three Arsenal rivals are said to be seriously monitoring the progress of Chukwueze, who has played over 60 official games for Villarreal since making his professional debut in 2018, such that The Yellow Submarine moved fast during the January transfer window to increase their asking price for the lad, and turned down a €35m offer from Liverpool for the 20-year-old rising star.

However, all these developments have left Cazorla worried, as he is calling for caution from Chukwueze from rushing to the club he also left in 2018, even as he admitted that the Nigerian lad and his team’s central defence ace, Pau Torres are both talented and have drawn enquiries from Arsenal, who he says approached him for details about both players.

Cazorla told popular Spanish newspaper, Marca: “They ask me about them and think they can make the jump to the Premiership. It’s good that great teams are interested in young players from Villarreal, but for the moment I tell them to leave them alone here. They still have to take steps forward. They both have a great personality, and their feet are on the ground.”

Dele Alli Gets Mourinho’s Praise For Apologising Over Coronavirus Joke