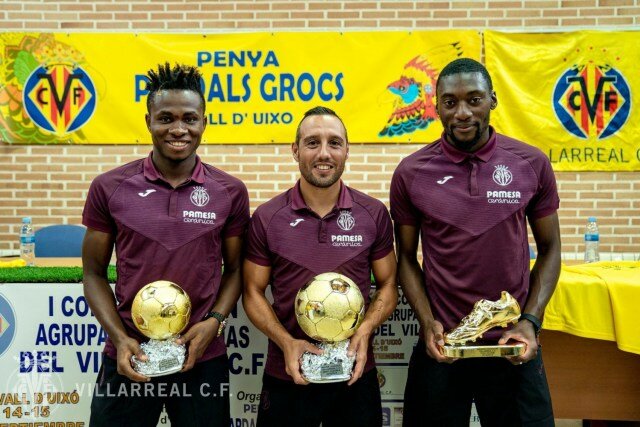 Villarreal of Spain winger, Samuel Chukwueze has attracted transfer interest from Liverpool of England, at a point the youngster believes he is already heading in the right for his career and says he is happy with the trajectory he is taking on the track to success in his chosen profession, megasportsarena.com reports.

Following his debut season in La Liga, in which he scored some great goals and was eventually voted his club’s revelation of the year, Chukwueze went on to star for Nigeria at the Africa Cup of Nations, where he also scored and won a man of the match award, all of which the youngster believes show early signs of a great career for him.

All these are coming just four years after his breakthrough with Nigeria’s cadet national team, Golden Eaglets at the FIFA U-17 World Cup in Chile, but Chukwueze admits he has received accelerated boosts to his prospects and expectations as a professional football.

This comes at a point UEFA Champions League champions, Liverpool are said to be interested in the 20-year-old Chukwueze, who is also wanted by has impressed a handful of top clubs across Europe, whose scouts are reportedly trailing the youngster.

Liverpool are one of the clubs alerted by his progress, as Chukwueze is already rated high as one of the current hottest prospects in European football, where the youngster is taking inspiration from Dutch legend, Arjen Robben, who built a reputation for cutting from the right and shooting with his left foot to devastating effect.

However, while acknowledging that his dream club is actually Juventus of Italy, which he uses as his virtual fantasy team while taking time out on Playstation, the fair-skinned natural left-footer added that he is now focusing fully on making the best of his second full season with The Yellow Submarine, as he hopes to do better than he did during his debut campaign.

He added that patience and the zeal of playing football have been part of his success secrets, of which he promised to keep as priorities in life, because, though he is ambitious, he is never in a hurry to achieve anything, but would take a step at a time, despite also constantly looking for greater gains and he is always eager to take giant strides.

Chukwueze told Goal.com: ”I know I am going in the right direction. I am happy just to be playing football and to see where that takes me.

“I always try to see the bigger picture, and to stay patient. I am not one who wants everything immediately. I am happy to take smaller steps on the way to the bigger goals.”