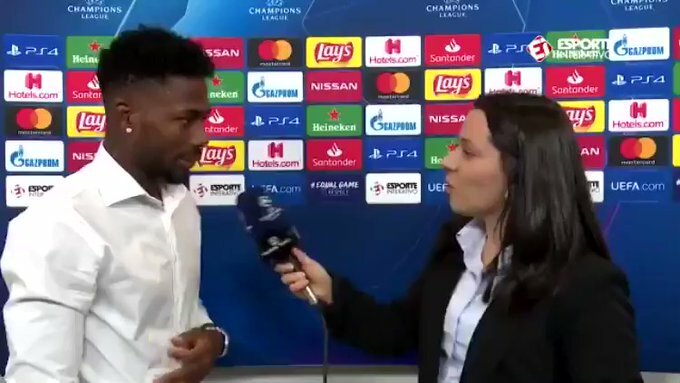 Bonaventure scored twice in that encounter, as he helped Brugge surge into a shock 2-0 away lead, only to capitulate in the second half eventually settle for a 2-2 draw with their hosts, after which he revealed his admiration of former Los Blancos’ star, Ronaldo.

Indeed, he joked before the game that it would be easier for Brugge to beat Madrid without Ronaldo, who joined Juve two seasons ago after a really successful and glorious spell in Madrid, leaving Bonaventure to dream of another chance to meet up with personally with the Portugal captain only some other time, or if his club get to face The Old Lady this season in Europe.

Incidentally, Atlanta, USA-based Cable News Ntwork (CNN) noted in their report about the match that the 21-year-old winger-cum-striker hit his historic brace on the same day of his country’s 59thg Independence Day anniversary.

The Olympic Eagles and Super Eagles’ rookie, who also joined the class of Nigerians to score in any match against the Madrid giants, and seventh player overall to ever net double goals in a Champions League away fixture against Real, performed Ronaldo’s popular ‘Si’ celebration in front of the Los Blancos’ fans, after hitting home his second of the night.

This comes at a point reports indicate that Bonaventure has been nominated along with Real Madrid loanee Achraf Hakimi, ex-Liverpool striker Luis Suarez and former Arsenal star Serge Gnabry for the Champions League Player of the Week by UEFA, following the conclusion of the matchday two fixtures on Wednesday night.

Bonaventure got the nod after netting a first-half brace versus Real at Estadio Santiago Bernabeu on Tuesday, while Barcelona’s Uruguay star Suarez matched that feat the following day against Inter Milan, but the best individual performance came from Bayern Munich’s Gnabry.

While the former Arsenal fringe player was involved with four goals and an assist, as the German champions thrashed last season’s finalists Tottenham Hotspur 7-2 away in London, Morocco star, Hakimi highlighted the Group F encounter between Slavia Prague of Czech Republic and Borussia Dortmund of Germany, scoring both goals in the German Bundesliga side’s 2-0 victory.

The immediate word from Bonaventure, though, was not about his nomination, but about his love for CR7, as he declared: “I admire Ronaldo a lot, and I am looking forwar5d to meeting him. I said it will be easy for us against Real Madrid without him in their team any longer, but I was only joking. I was joking. I was joking about the match, but it’s true that I admire Ronaldo.

“I like Cristiano and for me he is the best player in the world. I was sad when he left Madrid and I celebrated my goals like that to show them that they lost something. I am happy to have scored two goals, we really wanted to win the game and we were not far away, so we have to settle for a point, which is already a good result. I think it was down to the effort of the whole team.”