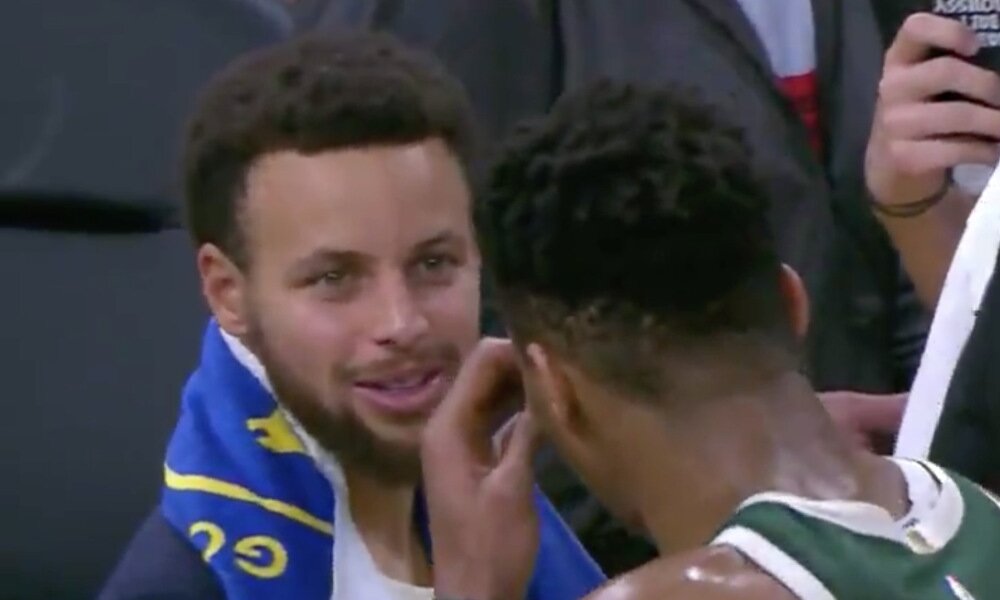 With both players suddenly getting together to exchange cordialities after the crunch encounter, many eyebrows were raised and tongues left wagging over reasons behind the affinity, leaving a school of thought resonating that it could be about transfer advice from one star to the other.

The mysterious encounter happened after The Warriors played The Bucks last week, but not a few speculations are now running rife, after Curry and Antetokounmpo exchanged pleasantries on the court, resulting in the two-time NBA most valuable player having to deny suggestion that he was recruiting ‘The Greek Freak’ for a possible move to Golden State.

In the encounter itself, The Bucks (35-6) boast the best record in NBA, and Giannis continued his majestic run of averaging 29.8 points, 12.8 rebounds, 5.5 assists, 1.2 steals and 1.1 blocks per game, as he looks good to retain his MVP award this season, but it was what ha[ppened after that is still hogging headlines and the rumour mill.

The story received enough attention that on Sunday, the daughter of Bucks owner, Wes Edens, Mallory Edens had a long exchange with TMZ Sports while at California Strong Celebrity Softball Game, details of which Yahoo Sports presented thus –

TMZ: “What was going through your mind when you saw Steph Curry trying to recruit Giannis?”
Edens: “I think that they’re just friends. A respect for the game … I don’t think Giannis plays video games. I don’t know, but … ”

TMZ: “Exactly. So he must be trying to recruit him for the Warriors, right?”
Edens: “I don’t know. No comment. No comment.”

TMZ: “Did you guys talk to Giannis afterwards, like, ‘Hey Giannis, everything still good with us?'”
Edens: “I don’t think we need to. He’s loyal.”

TMZ: “You’re not worried about losing him to the Warriors when free agency hits?”
Edens: “Life is good in Milwaukee right now. They’re winning. I think everyone’s happy.”