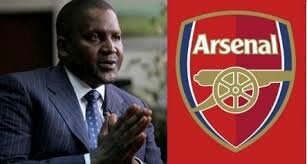 Nigerian businessman, multi-industrialist and billionaire, Aliko Dangote has declared that, in as much as he would love to buy London-based English Premier League club, Arsenal one day, he is not planning on doing so immediately, megasportsarena.com reports.

Although reports stated that he could make the move as early as next year, as the business mogul again admitted he has spoken about the issue several points in time, Dangote affirmed that he is not desperate about making it become a reality, especially as he currently has many expensive ventures at hand that he wants to first complete.

Dangote is an affirmed fan of The Gunners and he has not hidden his intention to buy the club, whose majority shares are currently held by Stan Kroenke, but the Nigerian businessman says he will be considering to buy the London club when he is ready, which he hinted could be 2021.

While speculation is now rife that he could make his move next year, Dangote stressed that he will only make a concrete effort to buy The Gunners, who are currently 10th on the English Premier League table with 28 points after 22 games, four points adrift of a European spot, only after the completion of his ongoing multi-billion dollar projects.

The 62-year-old founder of the multi-national conglomerate, Dangote Group, which is famous for products like cement, sugar, salt, flour and steel, is currently building what he says will be the largest single-train refinery in the world at Lekki area of Lagos State.

With production at Dangote Refinery scheduled to start later this year, Dangote told the David Rubenstein Show that he currently has his hands full on the ongoing project, hence his verdict that any talk about Arsenal for now is hold, but he hinted that 2021 could be the right time.

Dangote stressed: “It is a team that, yes, I would like to buy someday, but what I keep saying is we have $20billion worth of projects and that’s what I really want to concentrate on. I’m trying to finish building the company and then after we finish, maybe sometime in 2021 we can. I’m not buying Arsenal right now, I’m buying Arsenal when I finish all these projects because I’m trying to take the company to the next level.”