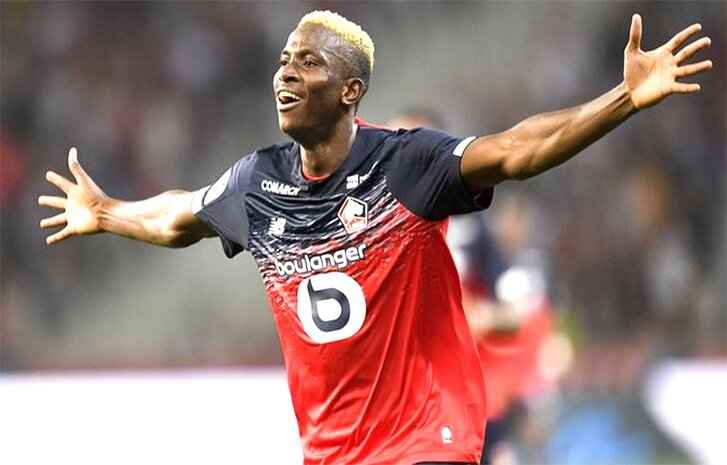 So soon after hope was dashed about the possibility of a move to Tottenham Hotspur of England coming his way, Lille Metropole of France striker, Victor Osimhen has now found himself in line for a deal at Sevilla of Spain, megasportsarena.com gathered.

While speculation also still lingers about his chances of joining Liverpool, Chelsea or Arsenal, in the English Premier League, Sevilla have joined fellow-La Liga sides, Barcelona and Real Madrid in the hunt for the youngster’s signature.

The report out of The Land of The Armada states further that the Seville-based side are the latest club being linked with Osimhen in the January transfer window, as interest continues growing in his uncanny knack for scoring a rain of goals.

Although he is only in his first season with Lille, after arriving from Sporting Charleroi of Belgium last summer, popular transfer market website, Fichajes disclosed on Thursday that Sevilla’s sporting director, Ramon Rodriguez Verdejo (Monchi) is heading to Lille for his new big signing.

Spanish sports daily, Estadio Deportivo added that ‘Monchi’ is thinking of making a return this month to France, with a view towards adding to the arrivals of Jules Koundé, Diego Carlos, Rony Lopes and Lucas Ocampos last summer.

Monchi reportedly has his mind on Osimhen and FC Metz’s Senegal striker, Habib Diallo as his best two options to beef up Sevilla’s attack, with the Chile 2015 FIFA U-17 World Cup top scorer from Nigeria top of his options in the last half of the winter transfer window.

The periscope on Osimhen is not out of order, as the Super Eagles’ rookie is having a great first season at Lille, where his haul of 14 goals in 26 matches, including two in the UEFA Champions League so far this season, has placed him high among the best under-21 players across Europe.

The youngster has become one of Europe’s brightest hot cakes, despite failing to get into the first team at VfL Wolfsburg of Gwermany in four years, after they bought him on the strength of his heroics at the Cadet Mundial, but a season on loan at Charleroi last term led to his immense breakthrough, and they quickly sold him to Lille only after buying him outright in the summer.

All those facts now mean that Sevilla will have to come up with something extraordinary, if they are to outsmart Barcelona and Real Madrid as well as Arsenal, Liverpool and Chelsea, who have all been credited with interest in Osimhen.