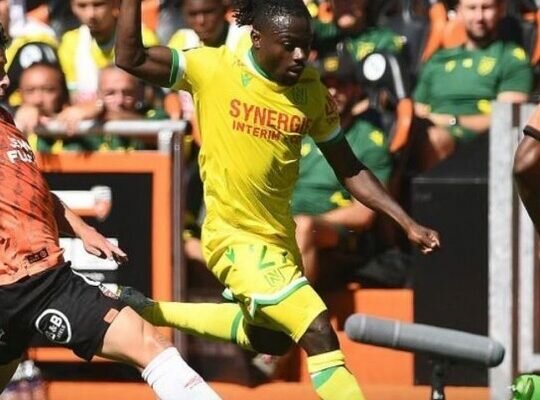 Moses Simon scored his third French Ligue une goal of the season, but it counted for nothing, as he fell 3-2 with Nantes against Lorient, who had compatriots, Terem Moffi and Innocent Bonke in their team.

Simon got his first start in four games and scored his side’s second goal, getting a touch on Ganago’s wicked shot which whizzed past Yvon Mvogo in the Lorient goal.

Nantes shot ahead through Ignatius Kpene Ganago in the 13th minute, but we’re pegged back as Lorient fired back with three goals in the 19th minute through Dango Ouattara, Yoann Cathline in the 60th minute and Ibrahima Kone in the 74th minute.

Moses made it 3-2 in the 85th minute, but it was too little too late to earn them any point.

The goal was Simon’s third of the season in five games. It was Simon’s first game since returning from the injury that saw him miss two league games against Strasbourg and Paris Saint-Germain.