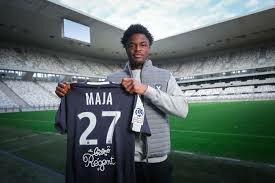 Girondins-Bordeaux of France striker, John Maja has been hit with yet another transfer bait, as West Ham United have reputedly entered the race for his signature this summer, megasportsarena.com reports.

So soon after reports emerged that Maja had caught the eye of Newcastle United of England and Glasgow Rangers of Scotland, the former Sunderland top scorer is now under the searchlight at West Ham who some years back had Victor Obinna Nsofor and Victor Moses on their cards.

Maja could now turn out to be the next Nigerian player to star for The Hammers, following information out of the London club that his form at Bordeaux has attracted keen attention especially with memories of how he excelled during his time at Sunderland.

The 21-year-old Maja has popped high into the wishlist of Rangers as a potential replacement for Alfredo Morelos who is set to replace Victor Osimhen at Lille Metropole of France; with a wild hunt is now said to be on for the Bordeaux hitman, who scored 17 goals in 49 appearances for Sunderland, after growing through their academy.

Incidentally, Maja is also well known to The Hammers’ coach, David Moyes, who gave him his Sunderland debut back in 2016 and he has already scored has scored nine goals in 31 league appearances for Bordeaux, whose season was cut short in April because of the virus.

The report adds that Maja has struggled in France and had already been thinking about making a return to England, despite having only joined the Ligue 1 club in January 2019, which leaves him open as a very viable option for West Ham, especially as his current team’s finances have been adversely impacted by the coronavirus pandemic and they could sell to raise funds.

The report by Sky Sports added: “West Ham United are eager to sign Bordeaux striker Josh Maja. The 21-year-old, who came to the fore through the Sunderland academy, arrived at the Ligue 1 club in January 2019.

“However, Bordeaux are struggling financially due to COVID-19 and it means they will look to sell players. West Ham boss David Moyes is an admirer of Maja and he could look to sign the attacker, who is also wanted by Rangers as a replacement for wantaway star Alfredo Morelos.”