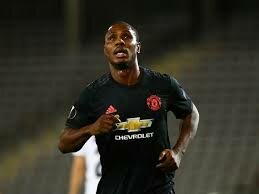 Manchester United of England striker, Odion Jude Ighalo has only up till this weekend to now if he will get a full contract at Old Trafford or whether he will be heading back to his parent club, Shanghai Shenhua of China, when his short-term loan deal ends on May 31; but a well-versed football reported in Queensland says here s no sign of worries rocking The Red Devils, megasportsarena.com reports.

Rather than for the club’s officials and coach, Ole Gonnar Solskjaer being in frantic trepidations over what could befall Ighalo next weekend, Sky Sports News reporter, James Cooper says The Red Devils are staying calm over the situation of things surrounding the former Super Eagles’ top striker, who scored four goals in only eight matches and within just two months at United.

Ighalo hope to keep the dream going full blast, until coronavirus put pad to his hopes by causing the season to be suspended and, though action is likely to resume in the middle of next month, but it could be without United having the services of Ighalo, who joined them on loan in January.

As it stands, Ighalo will return to Shanghai at the end of May and, though United are said to be keen to extend their loan agreement to potentially cover the remainder of this season, Cooper declared that the 20-time English champions are not desperate or frantic about their aspirations.

He punted out that, the fact that Marcus Rashford, who Ighalo was brought in to fill the vacuum caused by his injury in the first place, has now overcome the long-term back complaint that was diagnosed to keep him out until April, means Solskjaer’s side are not panicking over potentially losing Ighalo, who actually joined the team in training on Tuesday, despite doubt hanging over his future n Manchester.

“The relaxed attitude that comes from Manchester United, is that Marcus Rashford is now fit and so there is less need for Ighalo. But I think all things being equal United would like to keep him.”