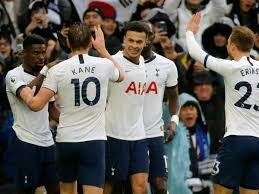 Tottenham Hotspur of England midfielder, Bamidele Alli has expressed satisfaction with what he called the ‘family atmosphere’ that exists at the London-based English Premier League club, which he says accounted for their commendable end to the season, megasportsarena.com reports.

Although they had a shaky start to the campaign, which led to the sack of their erstwhile heroic gaffer, Mauricio Pochettino, Spurs were able to end the season with a ticket into the UEFA Europa League, and Alli says it was mostly due to the high level of unity among the players.

While also commending their coach, Jose Mourinho for a job well done in bonding the players and encouraging them to stick closer together, Alli also admitted he had closer ties during the recently concluded campaign with Eric Dier.

The duo’s ‘bromance’ has been highlighted as one of the healthy boosts at Spurs, with details of their amity part of the spotlight shown in the latest clip of Amazon Prime Video’s All Or Nothing documentary.

The Tottenham and England duo are known to have a good relationship, featuring on Celebrity Gogglebox before, and a clip from the behind-the-scenes series shows Alli feeding his teammate a sweet, while the Nigerian-born England international, who joined Spurs as an 18-year-old, also speaks about how the entire squad are like a ‘family’ for him.

This is the second official clip to be released for the ‘All Or Nothing’ series, following the drop of the trailer earlier this month, which shows Mourinho arriving at the club’s training ground less than 24 hours after Pochettino was sacked, then showed the Portuguese tactician using some colourful language in a team meeting, telling his players to behave like a “bunch of c***s.”

Alli said in the clip released on rapper, AJ Tracey’s Instagram page: “People always used to say to me when I was younger there are no friends in football, but I feel like my team-mates here are just like a family and I would call every one of them my friend.”