Nigeria laboured to a 2-1 win over Sierra Leone in their opening Group A match of the 2023 Africa Cup of Nations qualifiers at the MKO Abiola Stadium, Abuja, reports Megasportsarena.com.

The Super Eagles, who were uncoordinated were lucky to escape with victory against a more spirited Leone Stars side.

Nigeria struggled in the early stages and Victor Osimhen started the game looking isolated as Moses Simon and Samuel Chukwueze buzzed around ineffectively too far away from him, with the long balls from the Nigerian defence failing to find the Napoli forward.

While the home side dominated the ball, the kind of defensive frailty that cost them at the Africa Cup of Nations in January was all too obvious.

They were caught on the backfoot early in the match as the visitors profited from poor defending to draw the first blood.

Jonathan Morsay’s flying header gave Sierra Leone a 1-0 lead after 11 minutes, the same time that the Black Stars of Ghana scored the back-breaking goal that denied Nigeria qualification for the FIFA World Cup.

The visitors almost doubled the advantage moments later but Morsay’s shot was tipped to the upright by the Nigerian goalkeeper, Francis Uzoho.

Alex Iwobi restored parity on 16 minutes with a well driven shot, from a pass from Moses Simon to level scores and Victor Osimhen scored what eventually became the winning goal three minutes to the end of the first period. 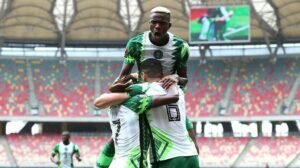 A brilliant cross from Ola Aina was headed down by Moses Simon, with the Napoli star stretching to blast home.

The pitch was a real mess and the sprinklers were brought out at half-time in an attempt to improve things.

Samuel Chukwueze threw away an opportunity to bury the Sierra Leoneans in the 62nd after a pass from Osimhen, but his angled shot agonisingly went wide.

Many other wasted opportunities by a lackadaisical Nigerian side and the inability of Sierra Leone to punish their hosts in the 2nd half saw the game end 2-1, to give the Super Eagles the three points as they head to Agadir, Morocco to confront Sao Tomé and Príncipe for their 2nd group game.

It was Jose Peseiro’s first competitive match in charge of the Super Eagles, but it was unconvincing, as they look to respond to a disappointing tournament in Cameroon earlier this year.

Nigeria crashed out of AFCON at the last-16 stage following a 1-0 defeat to Tunisia.