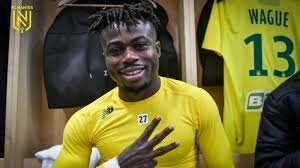 The Toon are looking to acquire the services of Simon and Blas as part of their club’s continuing rebuild. The pair have been regularly involved in Nantes’ attacking setup, contributing to 30 goals in Ligue 1 between them.

The Magpies’ striking department is in need of bolstering this summer with many players set to leave the club.

It is reported that Newcastle have even gone as far as sending scouts to watch them in action. The report also claims that Blas had been recommended directly from Newcastle star Allan Saint-Maximin as a player he’d like to see the club try and sign.

Simon is likely to be a harder target for the Magpies to acquire, however. ‘Concrete interest’ has been expressed by other clubs, including those in the top flight of France.

The report also confirms that the pair are more than likely going to leave Nantes this summer.

Simon is just 26 years old and still has room to develop as a player. The winger has contributed to 14 goals so far in Ligue 1. These comprise of six goals and eight assists.

He is also a regular for the Nigeria national team and appeared throughout their Africa Cup of Nations campaign.

Tammy Abraham Professes Love For Roma But Tightlipped About His Future