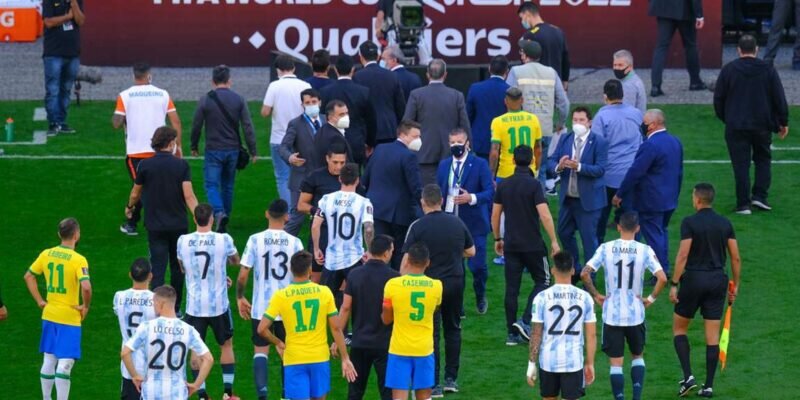 Brazil’s World Cup qualifier with Argentina was abandoned in bizarre fashion last year, but FIFA has ordered the rivals to replay the match, Megasportsarena.com reports.

FIFA has confirmed Brazil and Argentina will have to replay last September’s abandoned World Cup qualifier after rejecting appeals from both countries’ football federations.

The original fixture in Sao Paolo was abandoned after just five minutes when Brazilian health officials entered the pitch, with players Emiliano Martinez, Emiliano Buendia, Cristian Romero and Giovani Lo Celso accused by the Brazilian government of providing false information on their immigration forms and breaking the nation’s Covid-19 laws.

FIFA’s original ruling on the matter was announced in February, ordering the fixture to be replayed with all four of those players suspended and handing fines to both sides.

Both countries’ federations subsequently lodged appeals against those measures, but FIFA has now confirmed the fixture will be replayed at an as-yet unspecified date and venue.

“After analysing the submissions of both parties and considering all circumstances of the case, the Appeal Committee confirmed that the match would be replayed and also upheld the fine of CHF 50,000 that was imposed on both associations as a result of the abandonment.”

Brazil and Argentina have both qualified for the tournament in Qatar in comfortable fashion, with Brazil sitting top of the CONMEBOL qualification group with 45 points after an as-yet unbeaten campaign, and Argentina second with 39 points, meaning the replayed fixture will have no impact on the final standings.