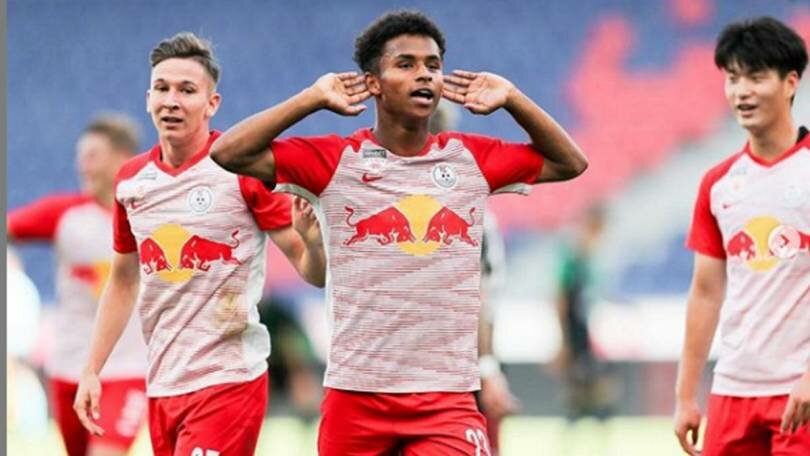 Four-Nigerian-born players, led by Kano-born Chukwubuike Adamu, were in action for Red Bull Salzburg of Austria in their 2-1 victory over FC Barcelona of Spain in a pre-season game on Thursday.

Megasportsarena.com reports that Adamu got off Salzburg’s bench to join the trio of Karim Adeyemi and Noah Okafor, who both started, as well a fellow-substitute, Bryan Okoh, in dazzling the Spanish LaLiga side.

Despite playing only either half of the game, all four Nigerian-born lads left huge impressions on the mind of Salzburg’s coach, Matthias Jaissle, as they dazzled in the friendly at Red Bull Arena.

The 21-year-old Okafor and 19-year-old Adeyemi led the hosts’ attack in a 4-4-2 formation deployed by the German tactician, while 20-year-old Adamu played all of the second half and 18-year-old Bryan Okoh got off the bench with a minute remaining.

Of the lot, though, it was Adeyemi, as Germany under-21 international, who first set tongues wagging, as he continuously created havoc among the opponents defence in the opening thirty minutes.

Okafor also got into the match highlights when he missed a glorious chance to open scoring off a delectable pass from Adeyemi in the 38th minute, but he narrowly shot wide, after which Luka Sucic finally put the home side in front with an absolute screamer from 25 meters.

It was Adeyemi that also provided the assist for that opening goal, after which Barca stormed back and got on level terms when Martin Braithwaite netted a bizarre equaliser nine minutes from time.

However, there was still time enough for Brenden Aaronson to score a winner for Salzburg in the 90th minute, as he was quickest to react after Adamu’s left-footed shot from inside the area struck the post.

General Dominic Oneya Was A Gentleman To The Core – Sanusi