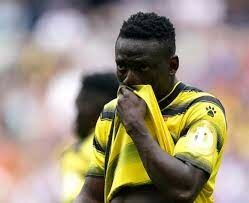 Watford have confirmed midfielder Peter Etebo is set to leave the club.

The 26-year-old Nigerian international could have signed permanently for the club, but they are not going to take up that option.

Instead, Etebo will return to his parent Championship club Stoke City when pre-season begins in a few weeks.

“Following the conclusion of the 2021-22 Premier League season, Watford can confirm that five first-team players have left the club,” read a Watford statement.

“Juraj Kucka has chosen to activate a release clause in his contract, bringing an end to his one-season stay in Hertfordshire, while fellow midfielder Peter [Etebo] has returned to parent club Stoke City following his loan spell at Vicarage Road.”