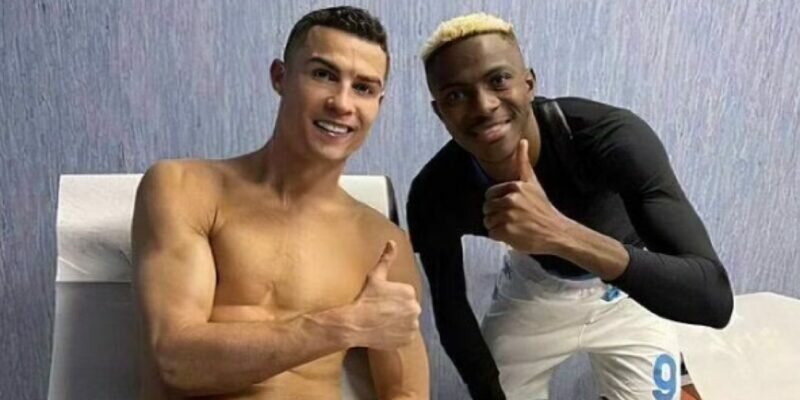 Napoli are reportedly in talks with agent Jorge Mendes to sign Cristiano Ronaldo in a swap deal that would see the Portuguese replaced in Manchester United by Nigeria striker Victor Osimhen, Megasportsarena.com understands.

The Italian side were linked with a move for the 37-year-old earlier this summer. But a bid was never made and Ronaldo was forced to look elsewhere to fulfil his goal of playing Champions League football.

However, Ronaldo’s agent Jorge Mendes has reignited a deal and is in talks with Napoli over a transfer .

Jorge Mendes, the agent of Manchester United striker Cristiano Ronaldo, is said to have offered the player to Napoli and Milan in an attempt to find a club that plays in the UEFA Champions League.

There’s only way for Mendes to resolve the situation and it is by bringing an offer from United for Victor Osimhen to replace Ronaldo at Old Trafford.

No talks have taken place yet and Napoli are not willing to sign the striker as they want to strongly rely on Osimhen. A transfer for Osimhen will only take place in case of a triple digit offer from United or any other side.

United is reportedly a possibility for the Nigerian international, who could command a transfer fee of £86million.

It is unlikely that United invest that high a figure because they’re doing the same for Ajax’s Antony. Bayern Munich are interested in Osimhen but it is merely a suggestion now.

Ronaldo is running out of transfer options as the summer window draws to a close.

Glasgow Rangers fans are hopeful of luring the Portuguese to Ibrox after qualifying for the Champions League for the first time in 12 years.

Marseille have also been linked with a move for the superstar, but such rumours have upset club president Pablo Longoria – who insists signing players like CR7 is not within the project.

Milan have also been contacted by Mendes though and the agent has proposed a similar thing to the Rossoneri suggesting that he could bring about an offer for Rafael Leao. Milan do not want a deal such as this and want to keep Leao this summer.

These two clubs aren’t the only ones that Mendes has spoken to, with Chelsea, Sporting and Marseille being talked about as well.

The striker could be forced to stay at Old Trafford and fight for his place in the side despite Erik ten Hag being sick of the Ronaldo circus that threatens to undermine his rebuilding job.