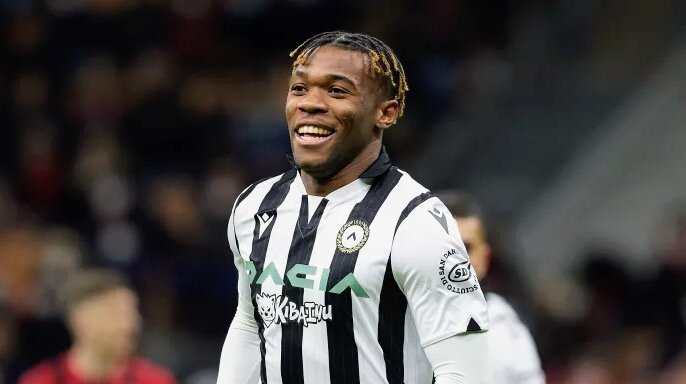 Destiny Udogie was one of the young players that stood out and produced some entertaining displays throughout the course of the last Serie A campaign as The Zebrette built an exciting squad filled with young talents, but, as per custom, he may end up leaving the Dacia Arena sooner or later.

Megasportsarena.com reports that the 19-year-old Italo-Nigerian contributed with five goals and three assists which has caught the eye of Juventus who are apparently interested in the wingback and Udinese may have no option but let him leave this summer.

The club’s director Pierpaolo Marino however says that the Zebrette want to keep Udogie .

“It is difficult for Udogie to leave in the summer. We are convinced that by staying with us for another year he can raise his value, which is now difficult to identify after just one season, and at such young age,” said the former Napoli director in an interview to Tuttosport.

Udogie has emerged as one of the Nerazzurri’s major targets to replace Ivan Perisic on the left, as the young wingback meets their criteria of a young player with the scope to improve over the coming seasons.

Moreover, other top teams in Serie A have also reportedly been tracking the 19-year-old, particularly Juventus.

However, if Marino’s words are anything to go by, a move for Udogie could be difficult as his current club have no intention of letting go of him during the summer transfer window.