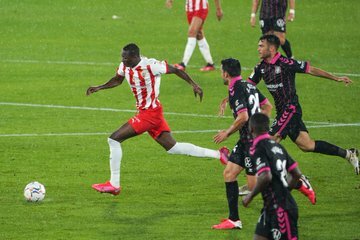 UD Almeria of Spain striker, Umar Sadiq could take after Stephen Ayodele Makinwa as he next Nigerian player to line out for Atalanta of Italy, as the tall hitman’s current goals scoring form in the Spanish lower division has caught transfer attention from the Italian side.

Megasportsaena.com reports that Sadiq was on song once again this weekend, with his goal helping Almeria pull closer towards promotion back to the op-flight Spanish LaLiga, but he might not be around to savour the spoils, as Atalanta want to snatch him away this summer.

However, it is not a one-way traffic, as Atalanta are only one among many other top clubs being linked with moves for Sadiq in the summer, as the Rio 2016 Olympics bronze medalist continues waxing strong on the Segunda Liga’s goals chart.

On Saturday, Umar again played a big role for Almeria, as he helped them to a 1-0 victory away to Tenerife by providing an assist on the goal that gave them victory and further boosted their promotion hopes.

The 24-year-old striker, who has 18 goals and four assists in 33 matches, put Largie Ramanazi through with the final pass and the win took Almeria within five points of Real Mallorca, who occupy the second automatic promotion spot with four matches to end the regular season.

Spanish newspaper, La Voz de Almeria is now reporting that Atalanta have identified Sadiq as a possible reinforcement for next season, noting that he has already netted 18 goals in Spain’s second-tier, where only Espanyol’s Raul de Tomas (22) and Sporting Gijon’s Uro Durdevic (21) have scored more.

When Sadiq registered the game-winning assist in Almeria’s win at Tenerife, his involvement on the chart moved up to 26 goals and eight assists combined for the season, which is a joint career best for the Football College of Abuja product, who played for Spezia and AS Roma of Italy in the early days of his career abroad.

Sadiq, who has also played for Glasgow Rangers of Scotland and Partizan Belgrade of Serbia, may now be inclined to accept a bid by Atalanta, and snub a similar offer from Sevilla of Spain, as that would take him back to his previous hunting ground in The Land of The Azzurri, where he also starred for a bit with Perugia, Torino and Bologna.

Victor Osimhen Nets Goals Number 9, 10 In 4-1 Win Away To Spezia