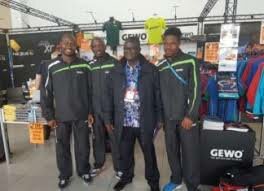 The president of Nigerian Table Tennis Federation (NTTF), Engineer Tikon Ishaku has described the ongoing suspension of all sporting activity due to the outbreak of coronavirus as a ‘funny situation’ across the world, but added that everyone just has to cope with the prevailing setting, megasportsarena.com reports.

While noting that the hiatus caused by COVID-19 is not peculiar to Nigeria, Ishaku went on to urge all of the country’s players, coaches and officials to ensure they abide by the regulations put in place by the ministry of health, in order not to be infected by the ailment.

The NTTF boss added that maintaining good health and safety are the most important things to think of for now, hence his verdict in welcoming the postponement of this year’s Olympic Games, which was initially billed to begin July 24 in Tokyo, Japan.

While stating his point on view over the decision reached by the host country, Japan and International Olympic Committee (IOC) to shift the Games, Ishaku added that no one can talk about competing in any sporting event if good health is not guaranteed and exhorted all persons affected by the postponement to resort to prayers for the COVID-19 pandemic to fade away.

“There is no game to participate in notwithstanding what amount of money that may have been spent by the host or even teams picking qualification spots. This is one thing that is happening in the world that has taken virtually everybody to a funny position but what do we do it’s all over the world.”