Abdullahi Eyes Promotion, Thanks Bursaspor’s Fans For Another Win 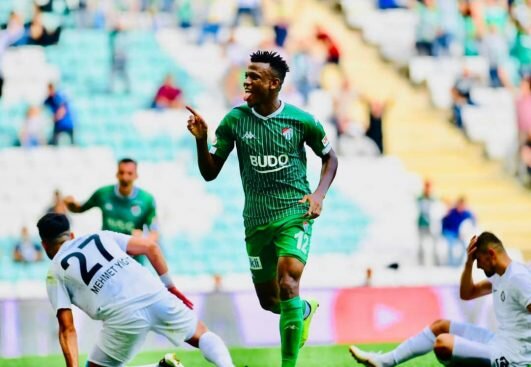 Bursaspor of Turkey defender, Shehu Abdullahi is still relishing his side’s 2-1 win over Fatih Karagumruk SK last weekend, and thanked their fans for helping them get all three points from the game, which helped them stay among the top-three in the second-tier division, and believes they only need to consolidate to get better in the coming days, megasportsarena.com reports.

With Bursaspor now placed third on the table with 31 points, just one behind second placed Erzurum BB, Abdullahi enthused that his side are climbing gradually for a place back into the top flight Turkish Super Lig, where he says they rightfully belong.

Although his side are still seven points adrift of top placed Hatayspor on the Turkish 1st Lig log, the ex-Sokoto United, Kano Pillars and Anothorsis Famagusta of Cyprus former defensive midfielder turned right-back said he is confident that his side will keep surging up the table.

After lining out in central defence for all 90 minutes of Sunday’s encounter, Abdullahi said he is ready to make further sacrifices for the team’s progress, even as he now sets his sight on their next fixture in the coming weekend.

Bursaspor will this time be away to fourth placed Akhisar Belediyespor on Friday, but Abdullahi is optimistic of another victory, as he took to social media to celebrate his team’s victory in their very first match of 2020, which he believes set the stage for better things to come for them.