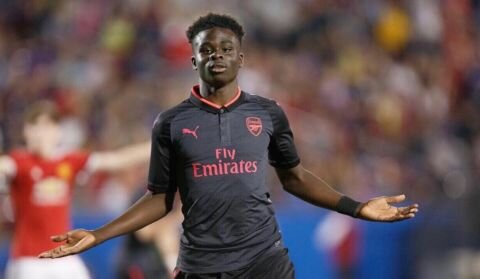 Arsenal of England youngster, Bukayo Saka has caught the eye of some scouts from Eintracht Frankfurt of Germany, who were recently in London to watch some budding talents.
Although nothing yet is being said about a concrete transfer offer from the German Bundesliga side for Saka, the youngster is said to have attracted keen interest from the scouts that turned up at Emirates Stadium.
Megasportsarena.com gathered further that the Frankfurt ‘spies’ went to watch an English Premier League 2 fixture between Arsenal and Leicester City, who were the original focus of the visitors.
However, Saka, who has already this season seen action for the Gunners’ main team in the UEFA Europa League and Carabao Cup, ended up stealing the show and ragged all attention on himself, as he earned a penalty, got an assist and scored ten minutes into the game.
It was another memorable outing for the Nigerian-born England under-19 star, who joined Arsenal at age eight and signed his first professional contract last year September.
Saka, who got his full arsenal senior debut in a Europa League match against FK Qarabag of Azerbaijan in December, has played variously for the North London club at U18, U21, U23 and first team levels this season.