Aigbogun Checks Out Seven England-born U-20 Players In Germany 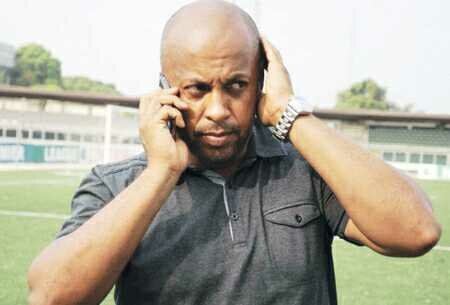 Nigeria’s youth national team, Flying Eagles coach, Paul Aigbogun is current checking out a total of seven players who were born in England, as he aims to build a crack squad for this year’s FIFA U-20 World Cup, megasportsarena.com reports.

With barely three weeks to the start of the 2019 Youth Mundial in Poland, Aigbogun is running the rule over his side at a pre-competition training base in Germany, where the team battled lower division side, SpVgg Greuther Fürth, in a friendly on Wednesday.

The build-up match against SpVgg Greuther Fürth came after top-flight German Bundesliga outfit, TSG Hoffenheim pulled out of an earlier scheduled fixture between their youth team and Aigbogun’s side, but the Flying Eagles were lucky to get an alternative at short notice.

It was another opportunity for Aigbogun to check out his array of home-based players, alongside those from clubs in Europe, including four that were born, bred and groomed in England.

The lot from Queensland who have settled in with the Flying Eagles at their base in Ingolstadt, Germany include Bournemouth midfielder, Nnamdi Ofoborh, who is in his second stint with Aigbogun’s team.

Of the lot,though, the biggest talking point has been Tom Dele-Bashiru, who already has a couple of senior outingts with Man City, following his debut for The Citizens’ main team at 18, but could not get any outing with the squad this season due to contract issues at Etihad Stadium.

Nonetheless, Del-Bashiru is not showing any signs of lethargy, as he has churned out top-notch performance in the Flying Eagles’ training, while exhibiting exceptional qualities during each session in Ingolstadt.

The 19-year-old midfielder has been able to wow all officials and fans at the team’s training, with everyone declaring that Dele-Bashiru has all the key elements of a playmaker, with neat dribbles and piercing passes.

Dele-Bashiru was not in the squad that lost 2-1 to Saudi Arabia last Sunday in Austria, because he had a single-entry visa to Germany, but he caught the eye in a 3-3 draw with SC Freiburg, as he scored few minutes after getting off the Nigerian bench.