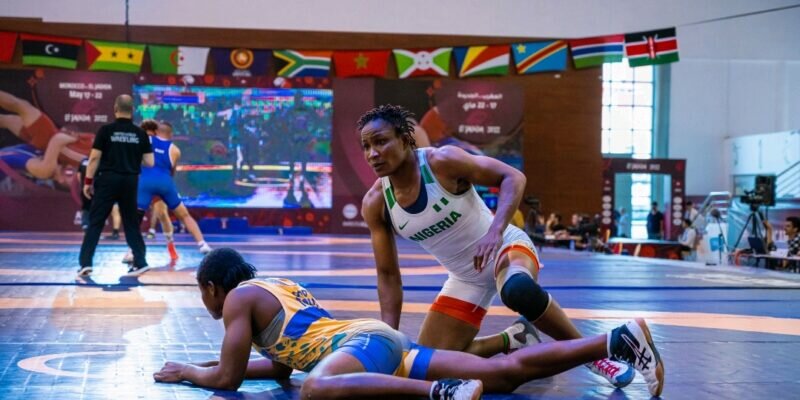 After easily overcoming her opponents in the earlier rounds, Commonwealth champion Oborududu made light work of Egypt’s Menatalla Badran in the final, securing a 4-0 fall victory in just 40 secs  to claim an 11th title in a row.

Before the final, the 33-year-old recorded back-to-back pin fall wins against Houria Boukrif of Algeria and Cameroon’s Blandine Ngiri in the first and second rounds respectively, before dominating Badran – whom she eventually conquered in the final – 10-0 via technical superiority in the 3rd round.

Oborududu overwhelmed Rosie Tabora of the Democratic Republic of Congo 10-0 via superiority in the semi-finals before clinching gold without conceding a single point.

On her part, world silver-medallist Odunayo Adekuoroye, who moved up to 59kg category, practically destroyed the field to claim a straight 7th African Championships gold.

Before overcoming Tunisia’s Siwar Bouseta 12-2 via superiority in the final, the back-to-back Commonwealth champion had beaten Atika El Asla 12-1, Bouseta 11-0 and Congo’s Parfaite Mambou 10-0 in the semi-finals.

On a day to remember for the Adekuoroyes, Odunayo’s younger sister Mercy won her first senior title, with victory in the 53kg class.

While leading 7-1 in the final, the former African cadet champion pinned Ivorian Nogona Bakayoko to win 9-1 and bolster the family’s legacy in the sport.

Having moved up to 76kg, African champion Hannah Reuben, however, settled for silver, after losing 5-1 to title-holder Samar Hamza of Egypt in the final.

Similarly, Team Nigeria’s Patience Opuene also won silver in the 62kg class, after losing to veteran and Olympic bronze-medallist Marwa Amri of Tunisia, who claimed a record 12th continental title in a row.

On a very fruitful day for Nigeria at the Championships, Ebi Biogos (72kg) and African champion Sunmisola Balogun (65kg) ensured all 8 wrestlers eventually paraded by the country in Women Wrestling won medals, both claiming bronze.

However, Team Nigeria surrendered the Women’s Team title to rivals Tunisia, who fielded a full team (of 10 wrestlers) at the tournament. The North Africans finished with 179pts to condemn Nigeria – winners of the Team title in the last 10 tournaments – to second with 170pts.

In the Freestyle events, which will take place on the final day of competition on Sunday, 22 May, 4-time African champion John Ogbonna (74kg), Commonwealth silver-medallist Ebikewenimo Welson (57kg) and Tokyo 2020 Olympian Ekerekeme Agiomor (86kg) will hope to win more laurels for Team Nigeria.